Casper’s predictions for the final tonight!

This year has turned out to be very good and other than last year, it is hard to say who will bring home the victory. The countries in my top ten all have a potential to win but I will still try to predict in what order I think they will finish.

10. Sweden:
I think I might have heard this song a million times since i arrived in Malmö. It has been playing everywhere and I’m already tired of it. Robin has a magnificent voice but his performance is just plain messy and his clothes look ridiculous on him. But since the host country always does good on the scoreboard I predict that this will as well.

9. Belarus:
Here you have my wild card. I believed in Belarus from the very beginning, although many did not. The song feels like it has already been done before in Eurovision but it still think it has a good potential to go very far. This is my favorite and even though I am only predicting it 9th place, I still think that Alyona has the power to bring us to Minsk next year! Let’s just hope!

8. United Kingdom:
Bonnie Tyler is Bonnie Tyler, which is basically the reason that she should do pretty good. Sadly it seems that the voice is not quite there anymore – at least live. But you still recognize it and connect it to her old classics. So who knows what Bonnie, who is really the most unexpected underdog of the year, will do tonight.

7. Moldova:
This girl really puts on a show and the audience loves it. It’s a powerful ballad with a lot of happening and i think that could be to her advantage to be one of the first performers on stage. Most of the other likely winners are in the second half of the final. So I think people will remember her and they will vote for her. It’s just a bit sad that Romania is gonna use the same dress-trick.

6. The Netherlands:
Anouk got the best response from the audience in the first dress-rehearsal and I’m really worried this might win, because I’m not really a fan of the song. I still think it will do good – although I don’t want it to.

5. Denmark:
Like we all know, this is the predicted winner by both press and bookies. But this year I think the predictions are off. I feel like her support has gone down and that there are plenty of songs that have a t least equal chance of winning.

4. Ukraine:
This fairytale woman has a lot of presence and charisma. She will do great, no doubt, but i just feel bad for the giant that has to carry her over the stage in the beginning since he apparently has severe health problems related to his tallness and he is suffering from carrying Zlata in. I just hope he gets well paid!

3. Finland:
I believe in Finland. They have lyrics that are very easy to remember and to sing along with. It is already one of the most popular songs on the dance floor in Malmö. So she will win a lot of voters over with silly/simple lyrics and a fun performance.

2. Georgia:
I put money on this to win. It’s the second last to perform in the competition and it is a very strong ballad with big winning potential. Denmark should watch out for this one! For me this is both a realistic winner and one of my favorites.

1. Azerbaijan:
Is Europe going to Baku in a year, yet again? Well, the chances are big. Not a favorite of mine but we all know that they usually do well and if the rumors about Turkish people all over Europe picking up the phone for their friendly neighbors, I think this is almost a given. Lets see!

Euro-Haukur at Monitor writes for us for the first time to day!

What nobody thought could ever happen has indeed happened. None of the ex-Yugoslav countries will be in the final tonight! Which is of course the first time that has happened after the semi-final was first introduced.

Another interesting thing is that all the Nordic countries are in tonight. The tables have turned so perhaps the Balkan nations now refer to us as the “Northern mafia” but at the same time we should hope that the myth of the “Eastern mafia” has died.

But if we just imagine that the common person in the Balkan is not at all happy with us in the north and the west, what impact could that have on tonight’s results?

This is something that has been discussed widely amongst fans here in Malmö. Many believe that Greece, as one of the nearest neighbors, will eat up all the Balkan douze points while others believe that the Greeks are not at all popular with their neighbors – especially the ones in Macedonia, because of a long lasting, ongoing neighbor dispute. Others think that their friends right across the Adriatic sea, the Italians, have more support coming their way. However, in a year where Denmark is what most people seem to betting on, the big question should be: Are the Balkan nations really that subjective (as us in the North seem to be – at least in Iceland)? Ore better yet, do they even like the Danish song?

Where does that leave us? What will us Nordics do when all our “friends” are in the final? According to statistics it is next to impossible that Iceland is gonna give Denmark anything less than 12 points. However, it is quite likely that the neighborhood voting of the other Nordic countries will be much more evenly split between their friends. That can lead to none of them really taking a big lead in the area. It is even possible that their votes will even so much out, that the most popular non-Nordic country could actually will get ahead in the race.

According to bookies, Azerbaijan is yet again a likely winner, as well as Russia, Ukraine and even Georgia. These countries all serve us a very western dish this year and they also all have a history of very high placing in the final.

The Azeri song is by many considered the most likely to win of this lot. Could it be that Azerbaijan, the country that is the furthest away from the actual center of the continent, will be the lowed denominator once again?

Could that even be the key to success in this competition, to be too far away to get dragged into old cliques? If that is the case, then maybe it is time for Iceland to take the first step and try to think outside of the map when we vote this year.

And finally, one wish to whoever will read out the Icelandic vote this year: Please do not finish with the words “and finally, to our friends in Denmark!” when we give Denmark their annual 12 points. That would be a be a very positive step!

Posts will mainly be in Icelandic but check out the english version! 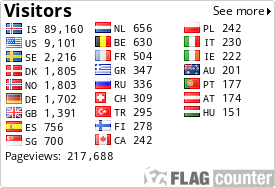